What does it take to build a solar-ready home?

Thinking of building your own home? Learn from two people who already did it—and went net-zero in the process! We sat down with Rob and Kat DeCamp to discuss how they integrate solar into their new home design. 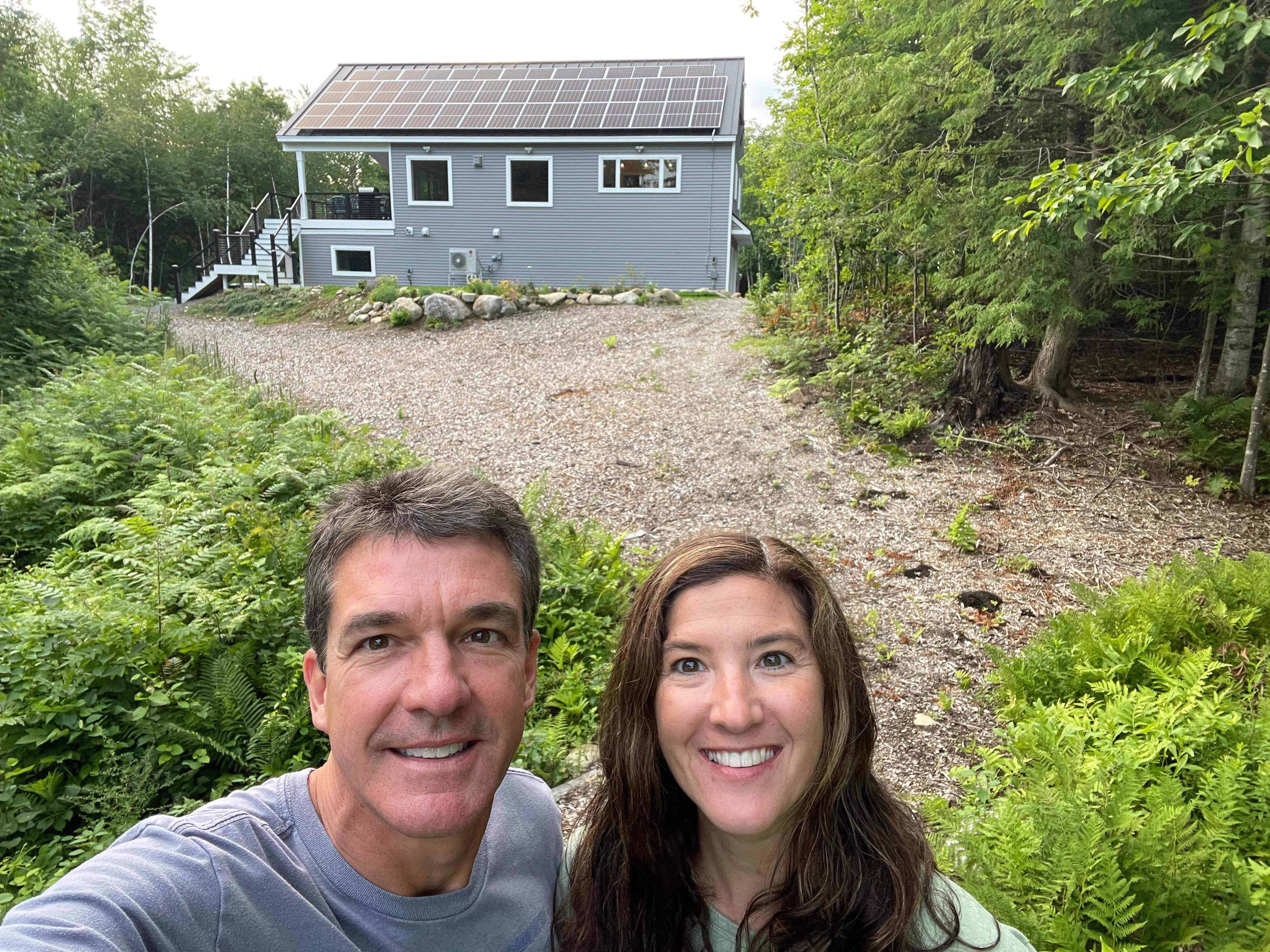 What made you consider building your own home?

Rob, We lived in an older home in need of some updating. It was a larger house and with just the two of us and our puppy we wanted to downsize our indoor living space. We liked the location, but we both love the outdoors and were dreaming of a smaller home with less maintenance surrounded by nature.

Kat, In the very early stages, we went to the New Hampshire Home Show. I think that was really where we started talking about solar and when we started saying, “Oh, this could really work with our house.” We were so early in the planning stages too, and having our builder there with us talking about solar, it really helped us as far as asking the right questions, like:

How do we want to set up our house?

Which way do we want the roof facing?

Where's it going to get the most sun?

How much do we need to clear in order to do this?

So, with solar in mind, how did you choose your roof design?

Rob, We decided we wanted a metal roof. They just last for a long time. They're aesthetically pleasing these days. We were going to go with something called Imperial Rib, then we found out from you folks that if we did standing seam, we would not have to penetrate our roof to install solar. We were going to go metal anyways and when they installed the panels, you know nothing has penetrated. That's just such a wonderful, good feeling.

When it was all said and done, we absolutely loved the Standing Seam as opposed to the Imperial ribbed, I think both of us are so much happier with the style of it too. Also, your roof itself will last so much longer with panels on it.

What about the pitch?

Rob, We were going to have a pretty good pitch anyways. But it's your folks who came over and said, “You know what, you guys have this opportunity, you want to maximize it?”  We discussed it with our builder, he agreed and now we have much more efficient snow shedding.

That’s a really common question we get about solar in New Hampshire: how do you get snow off of solar panels?

Rob, You know, we're not worried because of the standing seam. I would tell any new homebuilder that if solar’s important to them to go that route. The snow just comes off so much easier and slides underneath. I've never had a snow problem. And the squirrels aren't going to nest under there either.

With the roof designed, you decided to go with 37 400 watt QCELLS, making for a 14.8 kW system. How was the installation experience?

Rob, Your people are amazing. We started by talking to three companies and compared who had the better product, the more up-to-date product, a price that was a little bit better, and a warranty that was longer. Our solar advisor, Andy, was wonderful. He answers his phone all of the time, he calls you back before the day’s over. He's really great. And that's a good sign when that's the first person you're talking to.

I wanted to watch the installation process and I took the day off. They're so nice, and they're hard workers—working while they talk to show us how the installation took place and where it goes and why they do this.

Kat, Yeah. The flexibility too. When you're doing something you've never done before, like building a house, flexibility and adjustments your team made were amazing. Like just the aesthetics piece of it—little things like running our box on the inside, not the outside.

What are you running with your solar and what do your energy savings look like?

Rob, it's actually really neat. It's fun to watch all those bills come in with negative $300.

But we are running some things—we're running a hot tub, we have a refrigerator in our garage and we have an air exchanger.

Can you tell me more about the air exchanger?

Rob, So the home is an IFC home. The forms come in eight-foot-long blocks and don’t weigh too much. You put them together like Legos. You pound them together with a rubber mallet, add rebar and form lock and you go around, and then fill the forms with concrete. But it's really efficient—there are no leaks in the house and the home stays warm in the winter and cool in the summer. It's so efficient that you have to have an air exchanger. So you have the air exchange running all the time and you boost it when you want or need to. But all of the power needed to run the air exchanger comes from the solar panels.

We did put in split systems which are efficient with heat pumps, those kinds of things and we've used the AC a couple of times never ever worrying about the electricity usage.

Did solar overall meet your expectations?

Rob, Definitely. After running all of the numbers and crunching them, it made sense. I think our builder even said to his wife, “We need to get solar.”  We're both numbers, guys. So if people sit down and do the math. I know everybody's got a different budget, but it just works out and makes sense from a financial standpoint.

Do you have more questions about solar in New Hampshire? Our solar advisors are here to get you all the answers. Reach out to our team today!

By Jane Stromberg and Ariel Kent

What does it take to build a solar-ready home?