Yes, solar is a smart investment, but some solar companies claim that your loan will cost less than your current electric bill. We say: Maybe, but not so fast, there could be a catch! 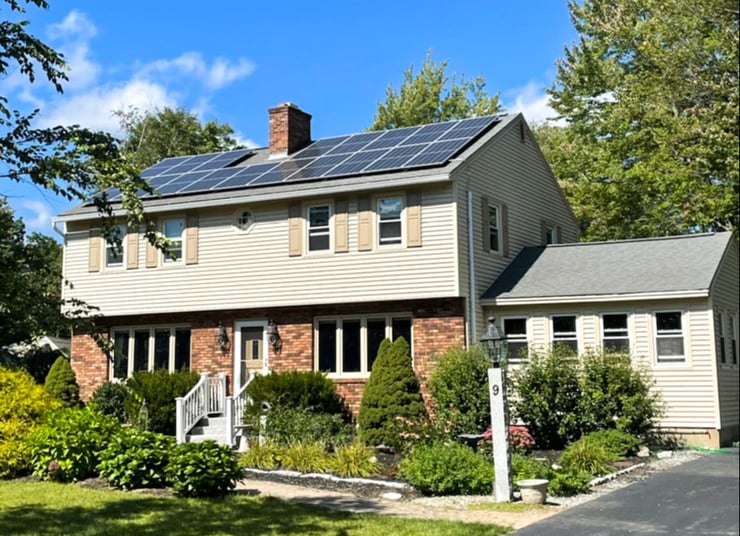 When it comes to shopping for solar, there are a lot of claims floating around. Commonly, we hear advertisements say that solar financing makes your loan payment less than your electricity bill. Senior Solar Advisor, Eric Kilens outlines how to be a savvy solar customer by considering these factors.

What Is My Solar Loan Payment Going to Be?

This depends on several factors (roof vs. ground mount, your current electricity usage, etc.) but most customers can expect it to be a little higher than their electric bill—think $15 or more per month.

“We go into meetings with customers telling them this,” says Eric. “In New Hampshire, you sell your power back to the grid at about 25% less than the cost of buying it. So, systems are sized about 25% larger.” More panels equal greater cost.

“Fortunately, more often than not, the customer is fine with it because they know they’ll come out ahead in the long run,” he adds.

Read On: How to Pay for Solar Panels in New Hampshire

Is a Solar Loan Worth It?

That loan payment may be a little higher than your electric bill… today. “But it's inevitable that electric rates only increase,” Eric explains. “So, they might be paying a little bit more now, but in a couple of years, 5-10 years, they will be making out better.”

“These customers are saying: ‘I've contacted you because my electric bill has almost doubled, and I haven't been doing anything different in my house. I haven't been using more energy, so the electric rates must have just increased!’”

But a loan over its term is a fixed payment. That means that it’s easier to budget a fixed payment versus a bill that fluctuates month to month. “By going solar, if you can just have a loan payment that's consistent throughout the entire year, I think it really helps families and homeowners from a budgetary standpoint with their utility or electric costs.”

Eric puts it into perspective this way: “Even though a customer might be paying more for their electricity costs—say $15—that's only $15 you're having to spend more per month and you just added a significant improvement to your house. That's an incredible deal!”

Is a Solar Loan Less than Your Electric Bill?

Despite all this, there are plenty of claims online that your solar payment can be less than your electric bill. If you hear this claim, pay close attention. You could be dealing with one of these scenarios:

Must Read: Solar Leases vs. Buy: What to Know

This is a bit of a double-edged sword. On one hand, you get low monthly payments, and you can claim the Investment Tax Credit on this portion of your purchase. On the other hand, you lock in how much interest you’re going to pay—even if your circumstances change.

For instance, if you sell your house and pay off your solar loan early, you can’t get that future interest (that you’ve paid for in advance) back. And it means you have a much higher up-front cost.

Buydowns can be more than 20% of the project cost. Is a loan with a high buydown bad? Not necessarily, but you do want to read the details to make sure you’re committing to the loan that’s right for you.

Bottom Line: Just like solar isn’t one-size-fits-all, neither is solar financing. If a claim sounds too broad and too good to be true, do your homework.

Ready to build your energy investment with solar? Click here to get started with our team!

What Are the Federal Incentives for Solar, Batteries, and EVs?