Thinking about an off-grid solar system? Here are a few reasons to reconsider. 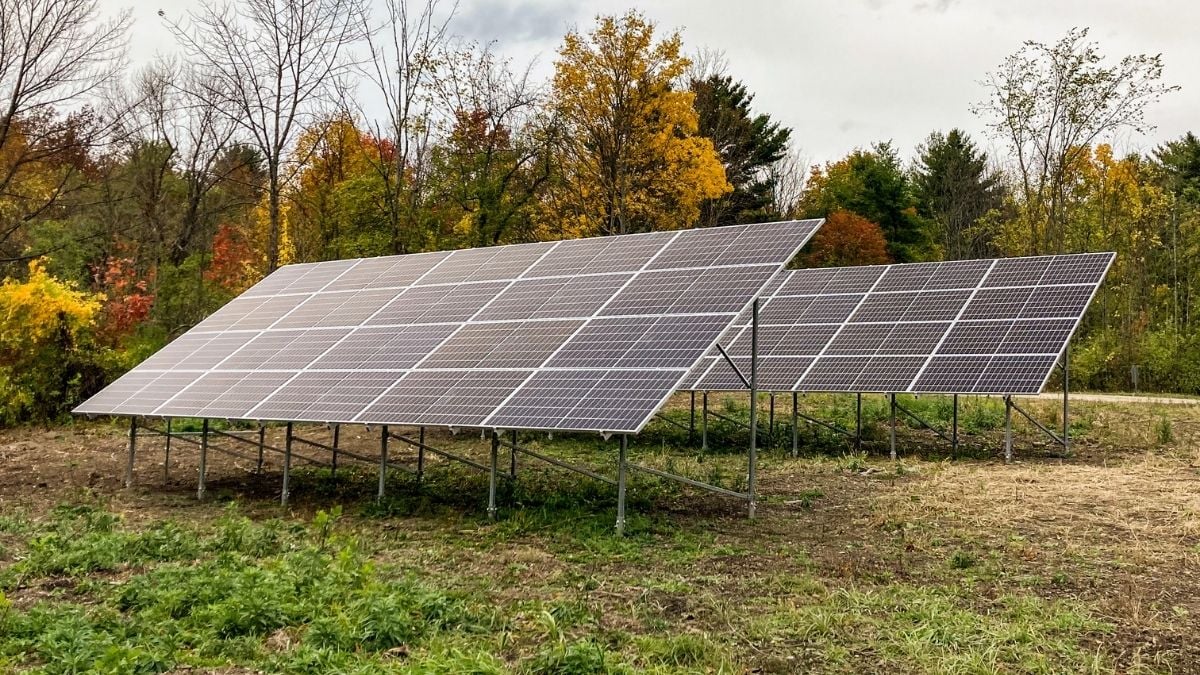 No electric bill, freedom from the utility, total independence—a complete off-grid solar energy system sounds like a dream, right? Not so fast. Our solar advisors have a lot of conversations about off-grid, and more often than not, customers decide that an on-grid solar system, also known as grid-tied solar, is a much better resilient energy solution. (And full disclosure: Granite State Solar does not install off-grid systems.)

The conversation can be summed up into two main pain points: “Off-grid is much more expensive than going grid-tied and it is way less convenient to be off-grid than on grid,” says Eric Kilens, Senior Solar Advisor at Granite State Solar. Let’s get into the details on what these downsides really look like.

What Is the Difference Between On-Grid and Off-Grid?

“On-grid means that you have utility lines coming in from the street and tying into your house,” Eric explains. “With a grid-tied solar system, the solar is powering your house in real-time, while also sending excess electricity that the array produces back to the grid, so the customer would be net-metering with the utility.” (More on net metering in a bit.) The main takeaway here is: if your solar doesn’t meet all of your energy needs, the grid is there as your safety net.

“With an off-grid system, there are no utility lines coming from the street to the house. The house is completely independent from the grid. It is solely relying on getting electricity from the solar panels or from a battery backup system, or a propane generator, as a third backup source of power.”

Must Read: How Solar Protects Against Utility Rate Hikes

The Cost of Off-Grid Systems

The cost of solar is highly variable depending on the individual’s needs, but one thing’s for sure: an off-grid system is much more expensive than a grid-tied one. The reason: You’re essentially building your own mini-grid. That’s a lot of infrastructure that you’re looking to recreate with a lot of factors to consider.

First, there’s the question of how to size an off-grid solar system? “You have to size that system for the worst-case scenario day,” says Eric. “That would be the winter solstice, the shortest amount of sunlight those panels are going to see throughout a day and having it be a cloudy day. And then sizing your battery system so that it can support the lack-of solar power that you’ll be getting.”

And even that might not be enough. “People who have gone off-grid tell me that in the winter, sometimes there isn’t enough solar and there isn’t enough in their batteries to provide them with enough power, so they have a 1,000-gallon propane tank buried in the ground and they have to use their generators.”

Eric says that many people who are interested in off-grid are exploring it as an alternative to running utility lines to a newly built home in a rural location. A lot of people get sticker-shock when they learn how much it costs to run utility lines (think $15,000-plus). “People are trying to find ways to save money up-front by going off-grid when in reality, they’re not going to achieve that,” he says. Most of the time, off-grid solar is still going to cost more than running utility lines to your house.

Eric mentions another off-grid cost to consider: the off-grid solar system battery life. “Your batteries are going to have to be replaced at some point but bringing utility lines to your house is a permanent solution.”

Regular solar is a lot less expensive than off-grid for a few reasons. First, you simply need less. If your system falls shy of meeting your energy demands for a given day, the grid will supply your power. You don’t need to over-size your system to account for below-average production days.

And that’s just on under-production days. Grid-tied solar also has the advantage when it comes to high-production days too thanks to net metering. When your solar is producing more electricity than your home needs, that energy gets sent to the grid. Your utility pays you for it as a credit on your electric bill. This off-sets the cost of any power you pull from the grid during times of lower production (like night or bad-weather days), so, over the course of the year, your bill is covered.

“If you’re purely off-grid, and it’s super sunny, your solar system is probably putting out more power than what your battery needs and what your house needs, so you’re generating excess electricity that you’ll never see a benefit from,” says Eric.

What Does Living Off-Grid Mean?

Short answer: It really means a whole new relationship with how you use all the electronics in your life. It’s a lifestyle.

“People want to live off-grid without changing their lifestyles—meaning they’ll run their driers and have central air conditioning,” says Eric. “That’s a big misconception. The battery technology is not there right now to accomplish being off-grid and having a normal, on-grid lifestyle.”

What does the off-grid lifestyle look like? It means using a lot less and closely monitoring what you do use.

“When you talk to people who are off-grid, they understand that their lifestyle has to be different from everyone else’s to be off-grid,” says Eric. “You have to be frugal.” He gives taking a 15-minute hot shower as an example. “It’s not an infinite supply of hot water. You have to really think of reducing your consumption.”

Read On: How to Use a Solar Backup Battery

Boosting Your Energy Independence with Solar and a Battery

Many of our customers explore off-grid to be independent from the utility. Granted, nothing is truly as independent as 100% off-grid, but you can still achieve 80 to 90% grid independence with a simple solar and battery combo—without breaking the bank.

“If people want to be off-grid because they’re worried about brownouts and blackouts, we have a solution for that: it’s having a battery with your solar system,” says Eric.

Eric says grid-tied solar with a battery is almost like having two batteries working together. First, there’s the actual battery. If the grid ever does go down, you know that you can still have electricity through your battery system. Total peace of mind. (Keep in mind that solar does not work during a power outage unless you have backup battery storage.)

“Then, think of the utility company as your second ‘battery,’” says Eric. “They buy your excess power from you, they hold that excess power on your electric bill as a credit, and then you take those credits back at night or on cloudy days when your solar is not putting out enough power.”

Bottom Line: For the vast majority of customers, grid-tied solar is much more attainable than going off-grid, and it’s a cost-effective way to boost your energy independence.

Click here to talk to a solar advisor about our battery offerings.